A little while ago we hosted our Conference Called Wonder in Utrecht, The Netherlands, and once again, wanting to share our experience of the Conference threw up the same conundrum: how on earth do you talk about an event that is beyond words?
A Conference Called Wonder suffers from this amazing beautiful luxury problem. Putting into words is like trying to bottle starlight, or dissect an aria. When the Sunday Assembly team reflected on the event, one question we came back to was this:
What made A Conference Called Wonder so magical? We thought we’d share a few of our big ideas…
Fellowship
Maybe it was on Thursday evening when people from all over the world met up in a historic bar (the brilliantly named Winkel van Sinkel) – there was a heady mix of long time organisers from across the world, and total newbies coming together in an environment where love is assumed.
Assumptions
The assumption was love, the assumption was openness, the assumption was vulnerability, the assumption was acceptance. One of Sunday Assembly’s key values is ‘radical inclusivity’. This manifested itself in people being able to connect instantly because they knew that they would be accepted no matter what.
Shared Values
The reason these assumptions were made is that we are 100% a values and mission driven organisation. These are not just put on a poster in an office and glanced at occasionally but they are lived and breathed.
Personal
The workshops in particular were about really personal goals and really personal questions. Indeed, the entire conference was focussed on How To Live Your Life As Fully As Possible.This connected people in ways that we can’t describe.
Location
Was it when people walked into Kytopia – a legendary Utrecht venue that had welcome Nirvana, Prince, the Rolling Stones and now, Sunday Assembly? The venue had character oozing from its walls (though that could have been beer). Instantly people absorbed this history and creativity and became performers, audience members, creators, participants- all at once.
Content
The content both creates this context and feeds off this context. We’d designed the line up so there’d be plenty for committed Sunday Assemblers but also for just anyone interested in living a great life. Shamash Alidina started proceedings sharing his knowledge on ‘Kindfulness’ and as the weekend progressed each talk built on the last and enabled an arc of shared knowledge and understanding.
Singing
The first songs kicked off and so did the conference (though conference does not seem to be the right word for what went down). There was singing all day and singing all night. The joy of coming together in celebration, raising our voices as one and dancing our way into the future that we are building.
Playfulness
We found out that a conference doesn’t have to be straight laced to be incredibly moving, informative and inspirational. Blending talks and workshops and kayaks and kazoos makes for a special blend of play and learning.
We’re in the business of helping everyone live life as fully as possible. And we’re learning too – learning how to create magical experiences that help people connect with other humans, sing together and learn deeply.
We can’t wait to sing with you. 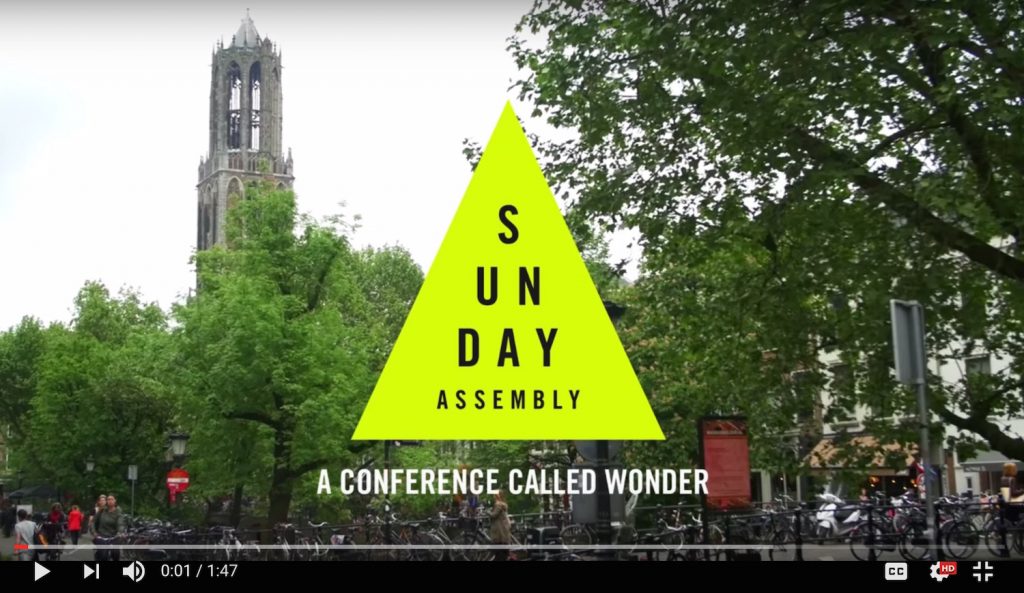 It is with huge pleasure that we’re able to announce – A Conference Called Wonder – the third ever Sunday Assembly conference. […]

Hello, and welcome to the series 25 Days of Action. These 25 days will help get you from “I’d love to have […]

What happens when you put 200 people in a tent, pair them off and give them three minutes to answer life’s […]