We have a chance for Sunday Assembly to make a big impression on the American stage, and we need your help to do it!

On June 4th, tens of thousands of people will flood Washington, D.C. for Reason Rally 2016. This will be one of the biggest gatherings of secular and freethinking people in history. Sunday Assembly will be there, and we need your help to make the most of it. 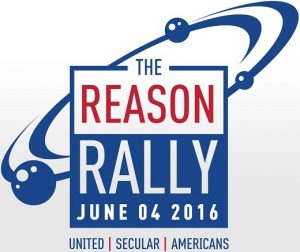 This is the second Reason Rally; events aimed at promoting the visibility of the secular person to the people of the United States and the world. This event takes place in the capital city right in front of the Lincoln Memorial, a famous spot for influential events in the US’s history.

American politics and public life continues to be wrapped up with religion. All across the country it is assumed that everyone is religious, typified with the frequent introductory question of, “What church do you go to?”, especially in Southern states.

The Reason Rally is a response to this, challenging the norm by gathering up the most massive group of secular folks ever known and pulling in well-known science communicators, speakers, musicians, actors, and more for a weekend of fun.

Sanderson Jones, CEO of Sunday Assembly says: “In Europe, it’s easy for us to feel welcome as a secular person- we are supporting a Sunday Assembly presence at the Reason Rally as one of many opportunities to show that anyone- wherever they are and whatever their belief – can access supportive and radically inclusive community.”

The people attending the Reason Rally are our people. They are folks who value Helping Often, Living Better and Wondering More; and who are looking for connection with people like them.

Our big crew of Sunday Assembly organizers from across the US will be there to meet them, shake their hands, and let them know there’s a community in their town that’s just perfect for them. We want to show people the joy they feel being a part of a Sunday Assembly and encourage many more people to sign up and build connections that could form new groups across the US and beyond.

Think of how many people attending this event value community. Think of how many of them haven’t yet heard of Sunday Assembly and would love it. Let’s meet them! This is a rare opportunity to go all-out and say a big hello to the secular community!

The Sunday Assembly Reason Rally team is planning an assembly for the morning after the Reason Rally at their mini-conference. We’ll have music, a fantastic speaker, and so much more to wake everyone up! It’s going to be amazing. 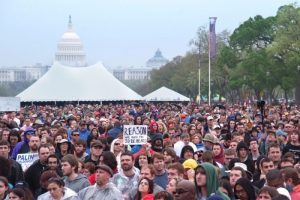 Patrick from Nashville on the Sunday Assembly Reason Rally team sums it up well:

“Four years ago, with Reason Rally 2012, the secular community made its debut on the national scene. It was the first event of its kind, as if to say “we’re here too, can we play?”  This second time around, we’re back with a lot more swagger, armed with Pew surveys showing the “nones” are one in four, maybe more!  In fact, we’re the fastest growing religious demographic, and we’re rolling an estimated 50,000 deep!  This is going to be a historic event, and the Washington establishment is taking notice. Guest speakers will include Johnny Depp, Bill Nye, and many more.

Sunday Assembly is showing up, big time!  We are the cutting edge of community building within the secular movement, and we are going to be official event sponsors.  We will be introducing ourselves to thousands who have never heard of us, representing in person and handing out swag.  It will be a big moment for Sunday Assembly in the USA, and we’re going to make a splash.  To top it off, we’ll be holding an actual Sunday Assembly to kick off the mini-Convention the next day!  With SA Nashville bringing the band, what better way to lead the charge?”

BUT, we need your help. We need to fund the magnificent materials we’ll be passing out to thousands of people all day on the National Mall. Attractive paper fans and postcards with Sunday Assembly’s information will keep people cool and form a lasting impression on everyone who receives one.

Please support the Sunday Assembly at the Reason Rally

Every dollar you give helps put more paper fans in a potential assembler’s hands. You can be the direct connection that inspires someone to join their local assembly or start one of their own. This could result in an explosion of attendance and raised visibility both inside and outside the secular world! (There are also some perks if you donate a little more, including a pin, t-shirt, and a secret codeword… Take a look!)

There are lots more details on the GoFundMe fundraising page, including more information about Sunday Assembly itself (if you don’t already know about us!) and details about our fundraising goals past the materials expense.

But here’s the bottom line: do you want to help Sunday Assemblies grow in number and size in the future?

Of course you do, and this is a fantastic opportunity to do so!

Give now, if you can, right at this very moment! Don’t risk forgetting later. This fundraiser won’t last forever: it ends on Monday, May 16th at noon Eastern Daylight Time (UTC-4:00)!

Give whatever feels right. We’re serious that any amount matters. The support from assemblies around the world is invaluable as our national team represents Sunday Assembly at our capital.

Thank you so much, and you’ll see us at the Reason Rally!

Today we are introducing the fifth in our series of blog posts from Anita Marsden – Clinical Psychologist, lover of life and member of […]

Hello! Hope all is well. Things are going grand here at Sunday Assembly Towers. Before I talk to you about coming to […]

Being transparent is pretty great. Whenever we tell you what we’re doing we get loads of advice on how to do it […]

Almost three years ago to the day I put a page up on the Sunday Assembly site that said: “Start Your Own […]